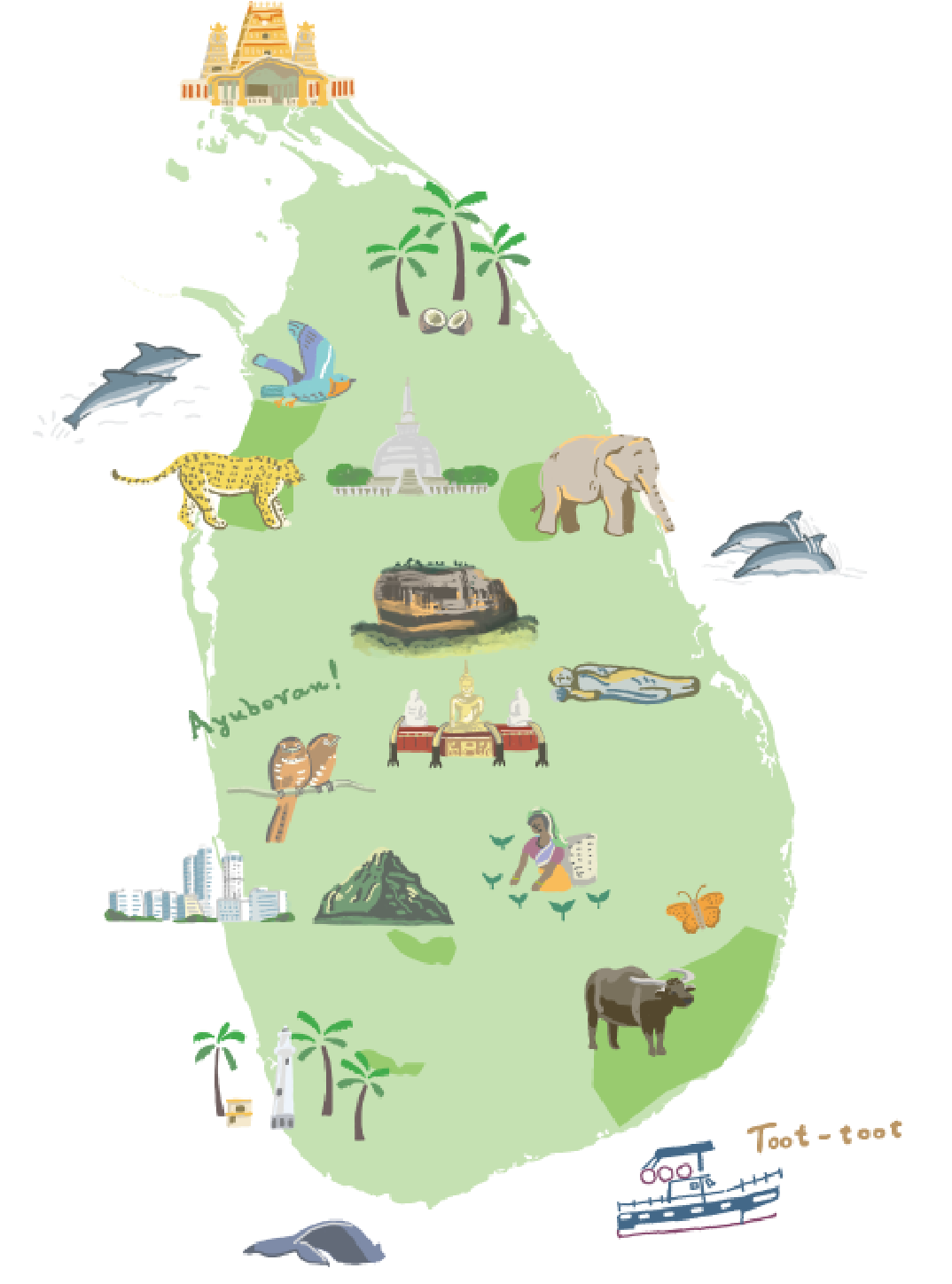 In Sri Lanka, Buddhist, Hindus, Muslim, Christian live together. The populations are; Buddhist 70%, Hindus 10%, Muslim 8.5% and Christian 11.3%.
The most high population ratio is Buddhism and they belong to Theravada Buddhism, Believed mainly by Sinhalese.They have a strong devotion and so the monks are being respected a lot.
[Poya Day] the holiday to celebrate full moon Buddhists worship temples and alter gets filled with floral tribute. This day, there will be a very long line in front of the famous temples just to enter. Also, most of restaurants do not serve alcohol this day (dry day).
Sri Lanka's Hindus is believed mainly by Tamil. Of the Hindu gods many of them believe Shaivism, and its son Ganesha and Murugan are enshrined at the temples mostly. Muslim is believed mainly by a tribe called Moors. Others include Indian Muslim and Malay.Since it was a stopping point of East-West trade, it is said that it was told by Arabian merchants.Sri Lanka's Muslim is protecting the traditional habitat of the Sunni.
90% of the Christian are Catholic mainly believed by Burghers, a mixed race of the western Europeans and the locals. It includes some Sinhalese and Tamil. Some people are successors by speaking English as there mother language. Of Sinhalese people in Fishermen caste, the five commandments in Buddhism include Ahimsa Commandment (forbid killing the living) and it is difficult for them to accept it, they believe in Christianity.

Though Sri Lanka is a relatively small island country, its climate varies a lot depending on the levels on which the monsoons affect each region. In many areas the temperature is around 29 to 31°C throughout the year, though there may be some 2 to 3 °C differences. But in the Central Highlands including Nuwara Eliya, it is averagely 16°C, which makes it feel like spring all year round. You need an outerwear in the morning in these areas.
April is said to be the hottest season in a year. Southwest monsoon comes after that, from May to September, which brings much rain on the southwest coastal areas or the highlands, though little on the northeast parts including Jaffna or Trincomalee, in which it is the dry season.
Then from December to March, there is less rain in the southwest areas which includes many beach resorts, and it is the best season for the areas. On the contrary, northeast parts experience lots of rain brought by the monsoon from Bay of Bengal.

Sri Lanka's currency unit is Sri Lankan rupee. It is written as "Rs".


Source: www.exchange-rates.org
There is an auxiliary currency, the Sri Lankan cent, but it is rarely used today. There are six types of bills: Rs5,000, Rs1,000, Rs500, Rs100, Rs50, and Rs20; Rs2,000 and Rs10 are also available, but these are old bills and will disappear soon. Coins come in four denominations: Rs10, Rs5, Rs2, and Rs1. As of August 2022, the exchange rate has been fluctuating greatly, and we recommend that you exchange small amounts of money at a time or use a credit card. Visa and MasterCard are the most commonly accepted credit cards, and American Express, JCB, and Diners are not accepted in many places. You can also use credit card cash advance services at ATMs, which are almost certain to be available at airports and city centers.

A porter in hotels, 100~200 rupee per luggage will be expected. The same amount for room service will be proper. At a restaurant, 10% of the payment is the market. Service charge may be included. Tips for guides and drivers; if they are accompanying you for few days, you should Tip on the final day.

Most hotels have wifi and can connect to your PC or smartphone. However, it is limited to the lobby only and the speed is a little slow in some place, and if you want more comfortable internet access, we recommend purchasing a local SIM card. Also, communication charges are inexpensive. You can purchase one from Dialog, for example, at the Colombo airport. An app on your smartphone allows you to purchase data packages and communication charges with a credit card.

Visitors to Sri Lanka from most of the countries need to obtain an Electronic Travel Authorization (ETA) prior to arrival to Sri Lanka. It can be acquired online.
▼ETA Application Website
URL: http://www.eta.gov.lk/slvisa/

Bandaranaike International Airport is the main entrance in Sri Lanka.
▼Entry
Immigration：Line up in front of the counter and hand out your passport, arrival card, printed-out ETA sheet to the officer. You will get a stamped passport back and that is all for immigration.
Baggage claim：Pick up your luggage from the tern table. If your luggage does not come out, please inform to the airport staff with your baggage tag.
Customs：If you do not have a huge luggage, your passport will only be checked. You will not need any documents.
Arriving lobby：There are few bank counters so you can exchange to Sri Lankan rupee here. If you don't have an arrangement for transferring to a hotel in Negombo or Colombo, line up at a taxi counter.